I’m not sure what to think of this Lego® trailer for 50 Shades of Grey. I’ve found the whole 50 Shades Phenomenom to just fly by me and now even Lego® is in on it. I feel like this is missing some kind of humour that makes it Lego®. I’m all for Lego® to continue making parodies but this one I’m not sure about. 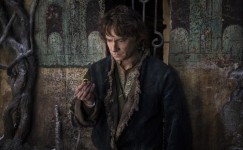 Tolkien lore led a Texas boy to suspension after he brought his “one ring” to school. Kermit Elementary School officials called it a threat when the 9-year-old boy, Aiden Steward, in a playful act of make-believe, told a classmate he could make him disappear with a ring forged in fictional Middle Earth’s Mount Doom. “It sounded unbelievable,” the boy’s father, Jason Steward, told the Daily News. He insists his son “didn’t mean anything by it.” The Stewards had just watched “The Hobbit: The Battle of Five Armies” days earlier, inspiring Aiden’s imagination and leading him to proclaim that he had … Continue reading →

This is the BEST way to scare people, dress a girl up like the girl from The Ring and just get her to stand in a regular hotel hallway. Win!

I must confess, I love Glee and for some reason after season one I stopped watching – must catch up on it. So how do you make a show like Glee even better? Simple, get them to do a Rocky Horror episode!

This isn’t really safe for work (considering the volume of F word usage) but it’s a more modern version of the classic “uses of the word f**k” flash, the longer you watch, the harder it is to just not laugh out loud. Originally from http://www.newgrounds.com/portal/view/458275

If you’ve not seen Kylie’s new video for “All the Lovers”, I’d certainly recommend watching it, it’s just so….well different; not in a “we expect different, it’s GaGa” way, in a “that’s not usually done in popular music” Unfortunately, the HD clip isn’t embeddable on Youtube so there’s a link to it below: http://www.youtube.com/watch?v=frv6FOt1BNI And if you like it, buy it!

Very smarty guy this, turned his tiny living space in a Honk Kong apartment into 24 unique rooms using sliding and folding walls. Makes maximum use of space for a batchelor!

Not sure who to credit this one to, but it certainly is a good one:

Yes, it’s finally happened, The Telegraph website made the typo when referring to the LHC: