9 – Interesting film – Not sure about it.

I watched 9 last night and while it certainly was emotional, I was left feeling somewhat let down and confused at the end of it. I’m going to talk about specifics in the film here so if you’ve not seen it yet and intend to, don’t ready anymore. 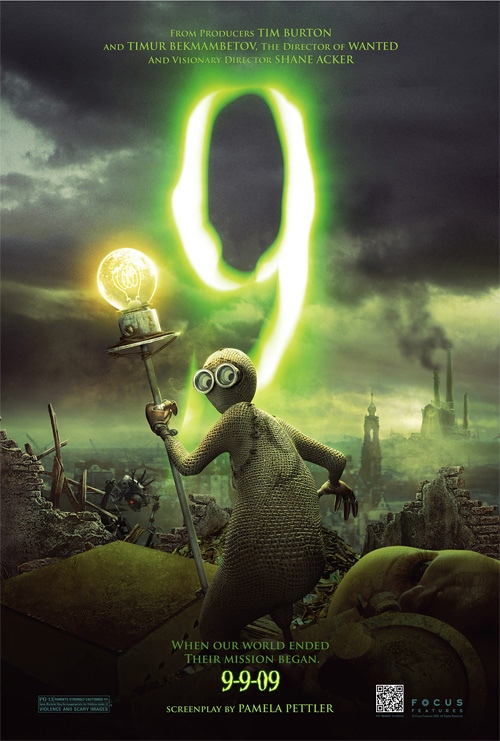 It starts off with a guy creating a small doll (that is to be 9) and bringing it to life. 9 soon meets others who are like him who explain what happened to the world – the film is set in a post apocalyptic future where man has been wiped out. So immediately you’re in a very bleak film here, this, on top of the dead people they show right from the start is a subtle hint as to the direction of the film!

The first doll 9 meets gets kidnapped by a beast just before he meets the rest of the dolls. 9, being the hero of the film, wants to mount a rescue mission and persuades one of the dolls to go along with him. The result of this rescue attempt is the death of the first doll he met and the re-birth of an “evil” machine created by man which creates more evil machines and kills more dolls. The machine incidentally is an artificially intelligent machine – as usual, humans first and last attempt before it went crazy on its creators and killed them all.

By the end of the film, of the 9 dolls you meet, 5 die, 4 survive – considering these are the last 9 “living” things on earth, that’s a pretty bad ratio of life to death. The ending does suggest future hope – the spirits of the 5 who died rise to the clouds causing it to rain, each rain drop appears to contain the souls of the 5 who died in the form of amoeba suggesting life will be reborn. However, given the bleak view the entire film portrays excellently, the loneliness of the final 4 and the unpleasant creations the machine makes, the film left me feeling rather down, I wanted more, this was one of those films I actually wanted a happier ending – I love screwed up endings in films but this was not a film that warranted one. I got emotionally attached to the film and it left me filled with emotions it should have cleared up for me.

Saying all that, I would recommend watching it if you haven’t, it is a visually stunning film and is guaranteed to get you worked up into an emotional state, just be prepared for an ending that could have been nicer.