wade.one » Gaming » HTC Vive – Home user with a room to use review

HTC Vive – Home user with a room to use review

When I found out the world was finally going to get at home VR I got myself signed right up on the pre-orders for the Vive: my thoughts were simple, if I was going to spend money on VR I wanted to be able to move around in a virtual world, not just my head…a rather easy justification for a geek to persuade themselves to shell out over £550 for a headset. This decision has turned out to be one of the best I’ve ever made when it comes to gaming on the PC, absolutely nothing compares to not just playing a game but being in the game; even with the low resolution (I have 16×16 vision, those pixels are bloody obvious), limited FoV and clear goggle like view…I still forget I’m in VR and try and sit down on a chair or walk forever until I get reminded by the virtual reminders (or wall as I often ignore the blue bars, ouch). 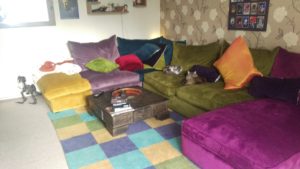 Delivery time aside (I ordered 23 mins after go live for pre-order and only got it after 3 weeks post launch), it was worth the wait. I was so excited to get it all up and running I tried to set it up in our living room. It’s not a bad size, but as the photo shows, the size isn’t that big. At first I thought “no worries I’ll walk on the sofa to map a larger area”.: this was a big mistake, one of the first games I tried, The Gallery – Episode 1, required me to pick up things off the floor that were stuck below the pillows of our sofa…so don’t try and cheat your space into a larger space than it is is my advice!

This led me on to a thought; above our living room where our gaming PC’s are, we have a “changing room” of sorts: basically a room we have our clothes, products, tumble dryer and some random crap. That’s a much larger room with minimal stuff in it…and we could clear even more space with some re-arranging and some much overdue tidying/disposal of crap. So we cracked on with it (myself and my partner) and we cleared a space almost 3 metres by 2.5 metres. This turned out to be perfect, even for Unseen Diplomacy, a game that moans about play size of anything less than ‘unrealistic for the majority of home users especially outside of the USA’. It’s a squeeze, with a few close encounters with clothes/walls, but it works. To paraphrase and update my last statement: don’t cheat your space and try to make space to really, truly, appreciate VR. 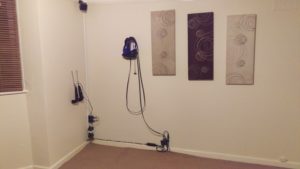 So, after drilling holes in our living room… 48 hours later I drilled holes in our changing room, a hole through the ceiling between the living room and changing room and spent several hours with my partner clearing out the room. I also put some nails in the wall with some Sugru covering them to hold the head set and controllers while not in use. The cables are held to the wall with some tacks and Velcro pads (I had some available from a previous project so they were an easy choice that doesn’t damage the equipment). I have plans to use a spare Pi I have as a remote desktop machine to my PC downstairs once I can pick up a cheap monitor to view my primary monitor on my PC downstairs, but that can wait: you only really need to click the VR button in Steam then you can run upstairs and put on the headset.

Something else worth taking note of are reflective surfaces, they really can screw up tracking – not just while running room setup but if you add something in after that stage is done.  While setting up the room upstairs every time I got to one corner it the tracking setup would go crazy and teleport about 2 metres into a solid brick wall, turned out to be this vase causing it – that curved surface really threw off the depth perception of the base stations.

It’s also worth a mention that your playable area does not need to be rectangular, it can be any shape you like – provided a rectangle can fit in it. For example, look at our room here (as the Vive sees it):

I’ve added the white lines with my amazing Paint skills in order to show roughly the shape of the room. It has a bay window area and the weird lines at the top right are due to a chest of drawers we need to have in there. The result is a rather odd shaped blue playable area with a clear rectangle “safe zone” that the Vive relies on. However just because it measures that rectangle as the playable area does not mean you can’t stray out into the weird shapes around the edge. In fact it means in some situations you can go outside the rectangle play area to look at things which can be cool: for example in Hover Junkers it makes it really easy to peer out of the round window.

What can I say, it’s VR, it’s first gen at home, it’s awesome regardless. You so quickly forget those graphics aren’t real because you can look around and interact: your brain really will accept anything as reality provided perspective is kept.

The responsiveness of the unit really is incredible, the dashboard lets you see a 3D representation of the controllers and they move as fast as you can move them with no perceivable lag. I did find however that the Universe Simulator can bring the thing to its knees if you smash two suns together and are too close: the resulting graphics cause some serious stutter.

Unseen Diplomacy is well worth a play if you have around 2.5×2.5m plus (ignore the warning it gives you, just be careful at the edges if you’re below the recommended size). The beautiful way it makes you turn corners etc inside your play space and makes you crawl and dodge lasers is a great example of VR done well in a limited space – it is sadly very short but still well worth it.

The Lab is certainly worth messing around in for a) the Portal references and b) the mini people. The archery fun as it’s simple and quick.

Job Simulator I heard a lot about but overall it’s “good” to me, while the robot talking provides humour, I found it quickly got boring.

The Visitor is a sign of things to come when it comes to horror. You start off stuck in a bed and…things happen. It’s short so I don’t want to go in to details but get it, it’s worth it if you like a quick scare.

Hover Junkers for me makes me love FPS’s again. This is how VR is meant to be right now at home. It’s simple in its premise: you stand on a hovercraft made of junk which you can walk around on, that hovercraft can then be controlled with one of your VR controllers. The shooting can be done with one or both (yes, you can shoot with both – good to know that!) controllers; shooting can be done while moving around or stationary. The crafts come in various sizes which basically mimic room sizes allowing you to feel like you’re always in VR and avoid those blue grid lines warning you that a wall is very close to your expensive VR headset. Also, another tip, junk (which gives you defense) is picked up using the same “weapon” you use to control the ship. Hit the kill engine button (the track pad) which turns on a laser on the end of the gun. Point that laser at containers dotted around the floor and hit the trigger, that’ll eventually bring it out of the ground and junk pops out of the top. Use the laser/trigger again to gather the junk!

Fantastic Contraption is beautifully simple – build stuff to get pink/purple things to their “home” using a few tools. Nyan cat lives here and farts to propel itself.

I hope, and will accept as an early adopter, that we get yearly VR updates, like graphics cards: each year provided new features and hopefully more pixels. Like playing the latest games at the highest graphics, VR is a drug for me and a drug I want to keep taking. Yes, it’s expensive, but so is smoking, so is drinking, so is snacking (food you don’t need but eat anyway). I would much rather throw my money at VR than many other modern day addictions and will gladly do so. In short… 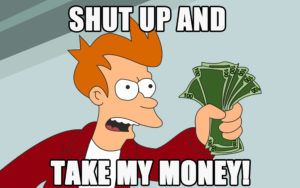